Solid-phase extraction methods make use of small columns constructed from an impermeable plastic material and packed with a variety of adsorbents held in place by frits, under trade names such as Bond ElutTM or Sep-PakTM. The commercial pre-packed columns are available in a wide range of packing materials, with uniform reproducible properties. In particular, I have found those packed with an ion-exchange medium containing chemically bonded benzenesulfonic acid of some value for silver ion separations, after preparation in a similar way to the corresponding Silver-ion HPLC columns.

Thus, Bond ElutTM columns packed with a silica-based benzenesulfonic acid medium can be converted to the silver ion form and used to achieve useful separations of methyl ester derivatives of fatty acids on a small scale [1]. No silver salts are eluted with the fractions, which can then be used directly for analysis by gas chromatography-mass spectrometry, for example. We have never attempted to scale up the procedure by using larger columns, although these are available.

A solution of silver nitrate (20 mg) in acetonitrile-water (0.25 mL; 10:1, v/v) is allowed to flow through a Bond Elut™ SCX cartridge (0.5 g adsorbent), wrapped to the level of the top of the sorbent bed in aluminium foil to exclude light; the SPE column is flushed with acetonitrile (5 mL), acetone (5 mL) and dichloromethane (10 mL) and is then ready for use. These solvents in various proportions are then employed in the optimum elution scheme for the isolation of fractions as listed in the table below. A methyl ester sample (0.1 to 0.5 mg) is applied to the column in a small volume of dichloromethane. Solvent mixtures are allowed to flow under gravity. 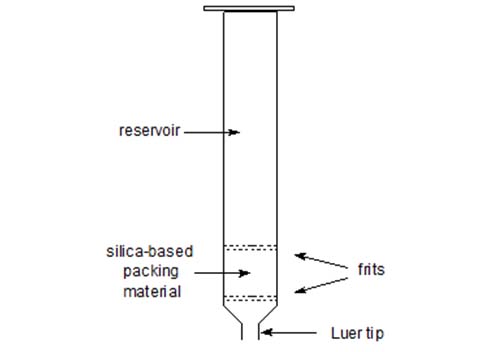 Satisfactory resolution of components with zero to six double bonds is obtainable. As substantial changes in solvent composition are utilized at each step, there is little cross-contamination, especially with the early fractions, though the last fraction may not be entirely pure (we often go straight from fraction 4 to fraction 7, collecting a combined polyunsaturated fraction). It is important that the columns should not be overloaded or that the flow-rate be increased artificially, otherwise resolution is lost.Note: Some modification to these conditions may be required for different commercial brands of column or even for different batches from some manufacturers.A very similar procedure was described by others [2], and the above method has been employed in other laboratories with an extension to separations of cis/trans monoenes [3-5]. The methodology has also been adapted to the separation of molecular species of triglycerides [6,7], and it has been used for cholesterol esters [8], hydrocarbons [9], and too many others to list here. It is easy to envisage the use of similar procedures for prostaglandins, steroids, insect pheromones and many other lipids. Supelco (Sigma-Aldrich) are now selling larger-capacity solid-phase extraction columns (0.75 g adsorbent) packed with an ion-exchange medium pre-impregnated with silver ions under the trade name 'Discovery Ag-ION SPE'. The manufacturers claim that up to 1 mg of lipid can be fractionated, and they recommend the methodology for the separation of cis- and trans-monoenoic fatty acids, especially. The first published application of these commercial columns is by Kramer and colleagues [10], and their protocol has been used successfully by others [11].References

Although not silver ion chromatography, it is worth noting that fatty acid methyl esters from fish oils (5 mg scale) have been divided into two fractions, i.e. saturated plus monoenes, and polyunsaturated, on a solid-phase extraction column with bonded aminopropyl groups (Wilson, R. et al., Lipids, 28, 51-54 (1993)), and similar methodology is used for hydroxy/nonhydroxy acids (see Ref. 3 above). Solid-phase extraction columns of the reversed-phase type have also been employed for enrichment of methyl eicosapentaenoate from algal fatty acids (Cohen, Z. and Cohen, S., J. Am. Oil Chem. Soc., 68, 16-19 (1991)).