The interaction between Ag(I) and the olefinic double bond(s) in the acyl residue in lipids is the factor determining the retention of the lipid molecule in a chromatographic system. Lipid molecules are retained depending on their structure to give a "retention order", which is of substantial practical interest. With this information, one can predict the order of migration/elution of lipid components under the conditions of silver ion chromatography. These rules apply both to thin-layer chromatography (Ag-TLC) and high-performance liquid chromatography (Ag-HPLC). Stationary phase properties and mobile phase composition may have a modulating effect, but they do not change the general retention pattern.

What one observes when a mixture of fatty acids is subjected to silver ion chromatography (after derivatization - most often in the form of methyl esters, although other aromatic derivatives are useful for specific purposes) is that the retention order follows in general the retention rules: 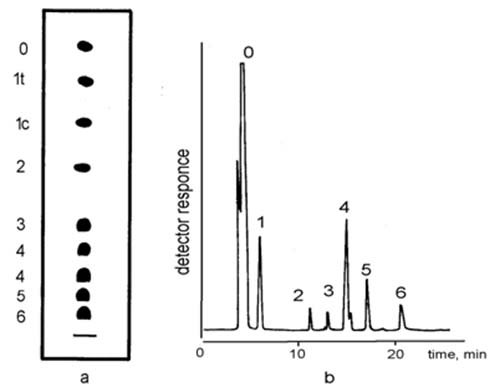 There are some rather unexpected but important experimental issues that are observed when studying systematically the retention of fatty acids. When it became possible to get more accurate and comparable data for the retention in the respective k' values (i.e. when Ag-HPLC became a robust technique), it appeared that retention, "measured" as k' value, does not increase in direct proportion to the number of double bonds, which might be expected assuming that each double bond interacts with a separate single silver ion and that the stabilities of these separate complexes are almost or strictly equal. Instead, the addition of one double bond in 9,12-18:2 leads to about a three times higher k' value than that of 9-18:1; 9,12,15-18:3 is held about 2.5 times more strongly than 9,12-18:2, and 5,8,11,14,17-20:5 is held 1.5 times more strongly than 5,8,11,14-20:4 [3].

Another observation made in the early days of Ag-TLC and confirmed later with Ag-HPLC showed that the retention order (the migration/elution order, respectively) of a series of 18:1 esters depends on the position of the double bond in the fatty acid carbon chain and that this order holds irrespective of the chromatographic technique in use (Fig. 2). 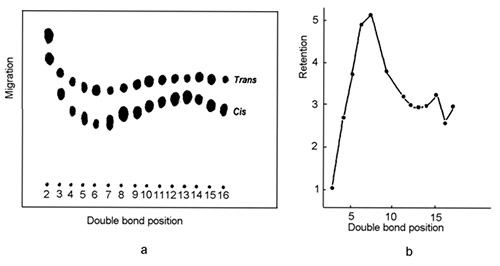 An important observation was that the effect of double bond position was strongly influenced by the nature of the fatty acid derivatives. Not only the strength of retention but also the differences between the retention factors of the isomers are influenced by the ester moiety thus increasing the selectivity of the chromatographic separation to enable procedures of great practical interest. Series of experiments have shown that the methoxyl group has the weakest effect on retention and selectivity thus minimizing the practical use. Retention and selectivity increases substantially after conversion of fatty acids to phenethyl-, phenacyl- and p-methoxyphenacyl, 2-naphthacyl-, 9-anthrylmethyl- and 2-naphthylmethyl esters. Of these the use of p-methoxyphenacyl esters appears most suitable [6].

The retention order of triacylglycerols follows the general rules outlined above as expected, since the fatty acid moieties are responsible for the interaction with silver ions. Retention behaviour is more complicated, however, since there are three different fatty acid residues to participate in the interaction: 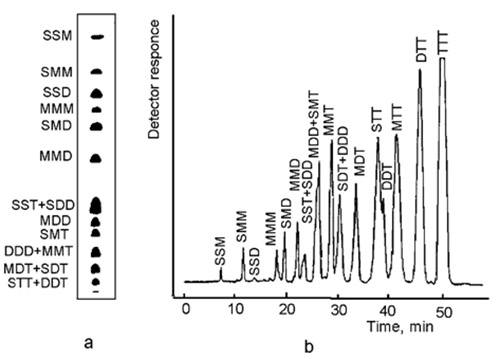 In relation to the retention of triacylglycerols, there is one further issue that deserves attention since it does not follow directly from the retention rules. Silver ion chromatography allows differentiation between positionally isomeric species. These are species that differ by the unsaturation of the fatty acid in position 2 relative to that of the primary positions (according to the Fischer projection) in the glycerol backbone (positions sn-1 and -3 remain indistinguishable). This ability is of practical importance since it allows (a) tracing adulteration of fats and oils in some cases where the matrices or the "impurity" has a specific distribution of fatty acids in the glycerol backbone; (b) control of randomization of natural fats and oils for different commercial purposes and (c) control of the production of specially designed ‘structured triacylglycerols’. This does not require expensive instrumentation other than a TLC plate with silica gel impregnated with not more than 2% methanolic AgNO3 or an HPLC instrument with a silver ion column. For example, the retention order (increasing retention) of commercially important samples, such as fully randomized palm oil, is -

(where S, M and D have the same meaning as above but the notation defines the acyl residue in position sn-2 - the middle position in the notation; positions 1 and 3 are not defined).

All reported results agree in that: (i) positionally isomeric triacylglycerols form adjacent pairs with the species in which the unsaturated fatty acid residue is in position either 1 or 3 are retained more strongly. (ii) The higher the unsaturation of the fatty acid residues the smaller is the difference in the retention of the respective triacylglycerol pair. In the this group of triacylglycerol standards chosen to represent the composition of common plant oils, the retention order observed was as follows:

The nature of the silver ion technique does not affect the elution order of positional isomeric triacylglycerols.