Most lipid analysts will come across the technique of silver ion (or "argentation") chromatography at some stage in their careers. The principle is very simple and is dependent on the fact that the pi electrons of double bonds in the fatty acyl residues of lipids react reversibly with silver ions to form polar complexes, the greater the number of double bonds the stronger the complexation effect.

The concept and its successful application was firstly introduced in 1962, in the same volume of Chemistry and Industry (London) where two authors, B. de Vries and J.L. Morris separately described different chromatographic techniques with silver ions embedded in the stationary phase [1,2]. These techniques, silica gel thin-layer chromatography and silica gel column chromatography, were rapidly accepted by the lipid community and underwent further development from mainly manual to instrumental techniques. Nowadays, silver ion high-performance liquid chromatography (Ag-HPLC) on self-prepared or commercial columns is widely used in lipid laboratories, although over the years much has been accomplished by thin-layer chromatography (Ag-TLC). Silver ion chromatography in its various forms has impacted substantially upon the analysis of lipids from animal and plant matrices.

Older readers may associate silver ion chromatography with the name of Lindsay Morris of Unilever Ltd. He described some of the first practical separations and published a definitive review which is still required reading for anyone who really wishes to understand the technique more than forty years later [3]. Of course, the technique has moved on since then and there are some more recent and substantial reviews available [4-6].

In thin-layer chromatography (TLC), silver nitrate can simply be incorporated into the aqueous slurry used to suspend the silica gel before the plates are spread and activated in the usual way, though some care is necessary to minimise exposure to light [7]. Alternative methods are available for commercial pre-coated plates. Lipid samples are applied to a plate and this is developed with a suitable mobile phase. Fully saturated lipids do not form complexes and migrate to the top of the plate, those containing one monoenoic fatty acyl residue come next and components of increasing unsaturation then follow. Trans isomers are held less strongly than cis, and one dienoic fatty acid is retained more strongly than two monoenes, as illustrated in Figure 1. 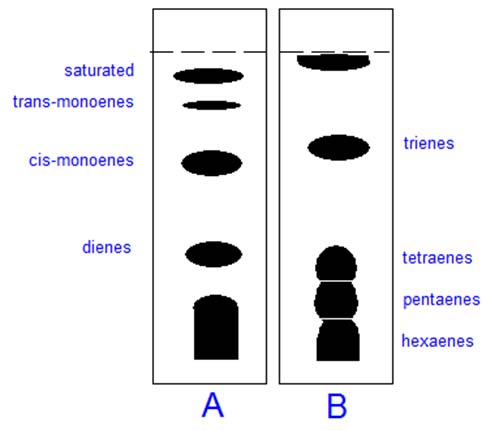 Many different classes of lipid have been separated and analysed in this way, including methyl esters of fatty acids, sterol esters, and phospholipids and derivatives, but most industrial analysts will associate the technique with the fractionation of molecular species of triacylglycerols. In particular, it was for many years the method of choice for the determination of cocoa butter equivalents in confectionery fats. With the latter, it is even possible to distinguish between regioisomers, for example monoenoic species in which the unsaturated fatty acid is in either the central or the outer positions of the glycerol moiety.

There are a number of drawbacks to silver ion TLC procedures, however, and one these is the "purple finger syndrome"; silver nitrate on the hands rapidly darkens leaving a stain that takes weeks to fade away. In addition and more seriously from a scientific standpoint, silver ions are eluted from TLC plates and contaminate fractions in preparative applications. Silica gel and dyes used for detection purposes are further contaminants. On the other hand, the equipment required is simple, inexpensive and readily available, so the technique will no doubt continue to be used in many laboratories.

There have been many attempts to adapt silver ion chromatography to HPLC, and these at first met with limited success only. Not surprisingly perhaps, Unilever laboratories were at the forefront of the development, and Hammond and co-workers have published a number of contributions on the topic. Their approach was to impregnate an HPLC grade of silica gel with silver nitrate and only then to pack it into columns (reviewed elsewhere [10]). Both the grade of silica gel and the method of impregnation were found to be critical. Isocratic and gradient elution procedures were developed with transport-flame ionization detection to obtain excellent resolution and direct quantification of confectionery fats, for example. The chromatograms are relatively easy to interpret, in contrast to those from reversed-phase HPLC. Unfortunately, applications to more highly unsaturated fats have not been published, and there is a major problem in that silver ions elute continuously in the mobile phase. A pre-column of silver nitrate extends the life of the column and protects the resolution, but samples and the detector are contaminated.

Nowadays, the favoured approach is to load a silica-based ion-exchange medium (chemically-bonded sulfonic acid groups) with silver ions [11]. Preparation of the column could not be simpler - it involves taking a standard pre-packed column with the appropriate stationary phase (Nucleosil™ 5SA) and introducing the silver ions via a Rheodyne™ injector while pumping water through the column. Finally, the aqueous phase is replaced with organic solvents. Probably only 50 mg to 80 mg of silver ions are bound to the stationary phase, but this is quite sufficient for very many useful separations. Practical details of the method are described in a separate web page on this site. Silver ion columns are also manufactured commercially and they have been used by many lipid analysts (Chromspher LipidsTM, Varian-Chrompack International, Middelburg, Netherlands).

For most published work with such silver ion columns, evaporative light-scattering detectors from various manufacturers have been used as gradient elution conditions are usually necessary. By introducing a stream-splitter between the end of the column and the detector, fractions can be collected for analysis by other means, for example for determination of fatty acid compositions.

Some of the early experiments with a phase of the ion-exchange type linked to silver ions were disappointing, largely because methanol was incorporated into the mobile phase and a small proportion of residual free sulfonic acid moieties catalysed transesterification when lipids were on the column. However, if aprotic solvents are used, there are no problems of this kind. The first elution schemes to be devised made use of chlorinated solvents, and excellent separations of fatty acid derivatives were reported, including positional isomers.

There has also been great interest in separations of molecular species of triacylglycerols. In this instance, the first published separations made use of a gradient of acetone into dichloroethane-dichloromethane, suitable only for fats with a relatively small proportion of linoleic acid such as sheep adipose tissue or milk fat, from which not only the usual fractions with saturated and cis-monoenoic residues were separated, but also those with trans double bonds [11]. Subsequently, Richard Adlof described a mobile phase consisting of hexane containing a small proportion of acetonitrile, both for simple fatty acid derivatives, and later for triacylglycerols, and this is now used in most laboratories [11,12]. It is my impression that excellent resolution is possible with both types of mobile phase, but that those based on chlorinated solvents permit higher loads in preparative applications.

Most samples of potential interest in the oils and fats industry contain a higher proportion of linoleic acid, but this can be accommodated with a ternary gradient system simply by introducing acetonitrile into acetone after the first fractions are eluted, as demonstrated with safflower oil here (Fig. 2). 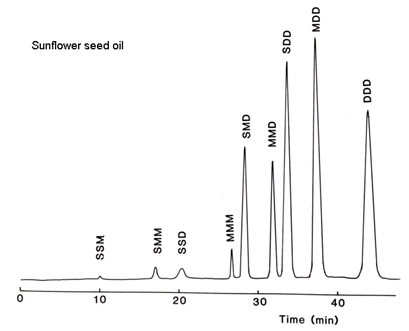 There is excellent resolution of most fractions as can be seen. The retention time of one dienoic acyl residue appears to be equivalent to about 2.5 monoenes. One triene is exactly equal to two dienes, so there is some overlap of dienoic and trienoic fractions when α-linolenic acid is present in a sample. The same elution scheme was employed for palm oil and cocoa butter, and this type of analysis is perhaps well suited to confectionery fats where a rapid separation of the important SSM species is possible. Indeed the resolution is such that there is ample scope for speeding up the separation by using shorter columns, faster flow-rates or a steeper gradient if this is advantageous for quality control, say. The methodology has been applied to samples as unsaturated as linseed oil and fish oils with considerable success. Further applications continue to be reported.

While regioisomers of the type SMS were not separated from SSM, i.e. according to the position of the acyl residue on the triglyceride molecule, by this solvent system, such separations were subsequently achieved with solvents based on hexane-acetonitrile [12].

In nearly all work of this kind, quantification has been accomplished by mass spectrometry or by collecting fractions, adding an internal standard and transesterifying for analysis of the methyl ester derivatives by gas chromatography. After careful calibration with appropriate standards, there is no reason why the response of an evaporative light-scattering detector should not be used directly.

One of the few successful preparative-scale applications of silver-ion chromatography consists in the use of ion-exchange resins converted to the silver ion form. This has enabled purification of 10 grams or more of unsaturated fatty acids with up to four double bonds. However, isocratic elution only is possible with methanol-acetonitrile as mobile phase, as gradients cause swelling and compaction of the resin. The method appears only to have been used in the US Department of Agriculture National Center for Agricultural Utilization Research in Peoria, USA.

Because of the disadvantages of silver ion TLC, analysts have looked to high-performance liquid chromatography (HPLC) in the reversed-phase mode for the separation of fatty acid derivatives and of molecular species of lipids, especially triacylglycerols. The technique has been employed in the main with bonded octadecylsilyl groups (ODS) as the stationary phase and with mobile phases containing acetonitrile as the major component (reviewed elsewhere [13]). Separations are then based on both the combined chain lengths and the number of double bonds in the fatty acid residues, one double bond reducing the effective chain length of an acyl moiety by the equivalent of about two methylene groups. It is a robust technique that affords excellent resolution in many applications with isocratic elution or simple gradients, although positional isomers of polyenes especially tend to be less well-resolved than with silver-ion HPLC. The latter requires much more complex gradients, and does not give separation by chain length.

It is worth noting that if silver-ion and reversed-phase chromatography are used sequentially, much more information is obtainable, and it is often easier to isolate single components in a high degree of purity in micropreparative applications. They should be considered as complementary techniques rather than as competitors.