Oils and fats of vegetable and animal origin are historically as well as currently the most important renewable feedstock of the chemical industry. Classic and well-established oleochemical transformations occur preferentially at the ester functionality of triglycerides [1] such as hydrolysis to free fatty acids and glycerol [2] and transesterification to fatty acid methyl esters. Fatty acids are transformed by reactions at the carboxy group to soaps, esters, amides or amines. However, most oils contain unsaturated fatty acids, such as oleic acid 1a, which is a cis alkene, in principle allowing the application of well-known reactions of petrochemical alkenes. Remarkably, only very few reactions utilizing the double bond of unsaturated fatty compounds are currently applied in the chemical industry, i.e. hydrogenation, ozone cleavage, or epoxidation.

Predominantly, saturated fatty acids with an even number of carbon atoms (C8–C18) and unsaturated C18-fatty acids such as oleic acid 1a, linoleic acid 2a, and in addition relatively small amounts of linolenic acid 3a, erucic acid 4a, and ricinoleic acid 5a (Fig. 1) are utilized industrially. The most important oleochemical reactions performed with 5a are the thermal cleavage to undecenoic acid 13a [3] and basic cleavage to sebacic acid (decanedioic acid) [4]. Interestingly, the enantiomeric purity of 5a, making it an interesting substrate for organic synthesis, has not been exploited appropriately. 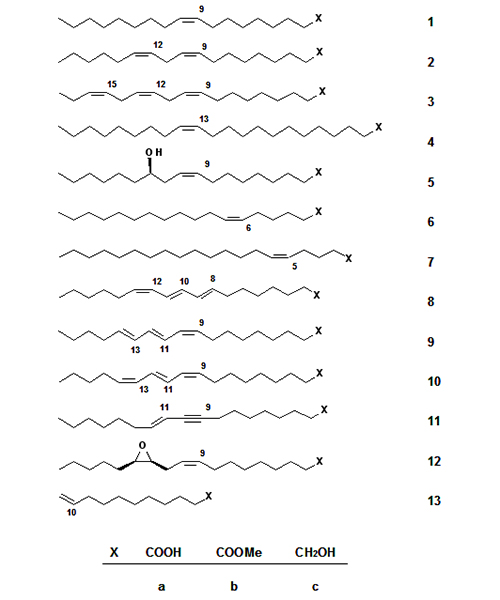 It should be of interest to promote the cultivation of new oil plants containing fatty acids with new and interesting properties for chemical utilization such as petroselinic acid 6a from the seed oil of Coriandrum sativum, (5Z)-eicosenoic acid 7a from meadowfoam (Limnanthes alba) seed oil, calendic acid 8a from Calendula officinalis, α-eleostearic acid 9a, and punicic acid 10a from chinese wood (tung) oil and pomegranate, respectively. Santalbic acid 11a is the main fatty acid of the seed oil of the sandalwood tree, and offers as well as vernolic acid 12a from Vernonia galamensis interesting synthetic applications.

In the last twenty years modern synthetic methods have been applied extensively to fatty compounds for the selective functionalization of the alkyl chain. Radical, electrophilic, nucleophilic, and pericyclic as well as transition metal-catalysed additions to the C-C double bond of, for example, oleic acid 1a as the prototype of a readily accessible, unsaturated fatty acid have led to a large number of novel fatty compounds [5-10]. Great interest has been focused on C-C bond-forming addition reactions which afford new branched-chain or elongated fatty compounds with possibly interesting properties.

New oleochemicals such as alkyl branched fatty acids and esters [11,12], alkyl substituted 4-chlorotetrahydropyrans [13,14], primary homoallylic alcohols [15], and β,γ-unsaturated ketocarboxylic acids [16] are obtained by Lewis acid-induced electrophilic addition reactions to the C-C double bonds of unsaturated fatty compounds. The products are formed in good yields, however, mostly an excess of the Lewis acid is required due to the complexation of the carbonyl group of the fatty acid or acid ester. A great challenge should be the development of new and efficient catalysts for these reactions.

The alkylation of long-chain unsaturated fatty compounds is of great importance because alkyl-branched oleochemicals have interesting properties [17]. They are used for many applications such as lubricants, cosmetics, softeners, defoamers and wood-protecting agents. Isostearic acid, a commercially available material obtained as a by-product in the montmorillonite-induced dimerization process of oleic acid, is used in the cosmetic and lubricant area, for example. However, commercial isostearic acid is not a pure compound as it consists of a mixture of substances including aromatic and cyclic derivatives.

The Lewis acid-induced hydro-alkylation reaction using alkyl chloroformates has thus been developed as a new method for the alkylation of alkenes in general and of unsaturated fatty compounds in particular [11,12]. The reaction of, for example, oleic acid 1a and isopropyl chloroformate in the presence of ethylaluminium sesquichloride (Et3Al2Cl3) gave approximately a 1:1 mixture of the regioisomers 9- and 10-isopropyloctadecanoic acid 14 (Fig. 2). 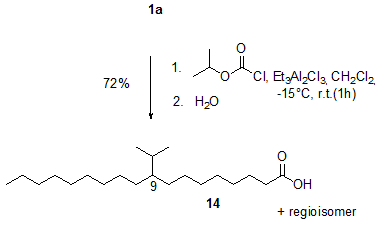 Figure 2. Ethylaluminium sesquichloride (Et3Al2Cl3)-induced reaction of oleic acid 1a and isopropyl chloroformate to give the alkylation product 14 [12].

The basic reaction mechanism can be easily rationalized (Fig. 3). In the presence of Et3Al2Cl3, isopropyl chloroformate decomposes by formation of CO2 and the isopropyl cation, which adds to the C,C double bond of, for example, an internal alkene to give a secondary adduct carbenium ion I. One could have thought that hydride transfer to adduct carbenium ion I gives the hydro-alkyl-addition product. However, a 1,2-H shift affording the more stable tertiary carbenium ion II possibly in equilibrium with ion III seems to be faster. Subsequent transfer of a hydride ion from an ethylaluminium species to the tertiary carbenium ions II and/or III and elimination of ethene leads to the hydro-alkyl-addition product. 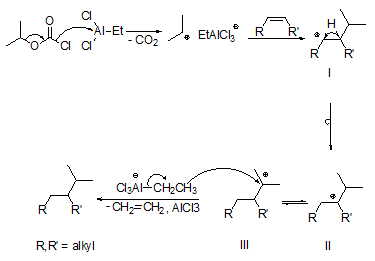 In applying this new method, 1-propyl, 1-butyl, 1-pentyl as well as 2-pentyl chloroformate could be used as alkylating agents. In some cases, e.g. alkylations of 10-undecenoic acid 13a, adding a hydride donor such as triethylsilane was necessary.

The ethylaluminium dichloride (EtAlCl2)-induced Friedel-Crafts acylation is an interesting and versatile method for the functionalization of unsaturated fatty compounds yielding the respective β,γ-unsaturated ketones with high selectivity [16]. The reaction can be carried out with a great number of different acylating agents such as acyl chlorides, dicarboxylic acid chlorides, cyclic anhydrides, unsaturated acyl chlorides as well as aromatic and heteroaromatic acyl chlorides.

The EtAlCl2-induced acylation of oleic acid 1a, among others, with acyl chlorides 15 gave the (E)-configured β,γ-unsaturated oxocarboxylic acids 16 with high selectivity (Fig. 4). The acylation products are substrates for a number of interesting follow-up reactions, for example 16g for Nazarov cyclizations [18]. 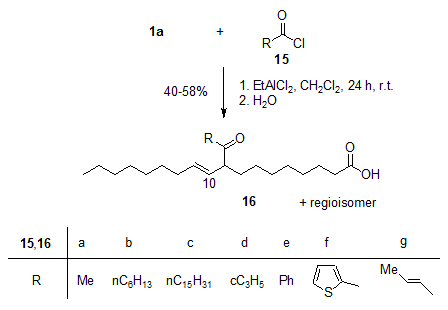 Figure 4. EtAlCl2-induced Friedel-Crafts acylations of oleic acid 1a with the acyl chlorides 15a-g give the unsaturated regioisomeric oxocarboxylic acids 16a-g [16].

3.  Additions of Aldehydes and Ketones

Tetrahydropyrans are important building blocks in many biologically active natural products. Formaldehyde and higher aldehydes react with unsaturated fatty compounds in the presence of aluminium chloride to form the corresponding alkyl substituted 4-chlorotetrahydropyrans in good yields and with high selectivity [13]. The reaction of two equivalents of formaldehyde with, for example, methyl oleate 1b gives the 3,5-dialkyl substituted 4-chlorotetrahydropyran 17 as a mixture of regioisomers and diastereomers (Fig. 5). However, the reaction shows considerable diastereoselectivity. The products were formed in a ratio of 17a:17b = 3:1. 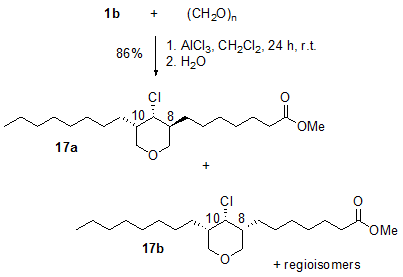 Highly regioselective cationic C-C bond-forming additions to the triple bond of the conjugated enyne system of santalbic acid 11a were reported [19]. For instance, the dimethylaluminium chloride (Me2AlCl)-induced addition of formaldehyde gave only one of the eight possible regio- and stereoisomers, namely, fatty acid ester 20 (Fig. 8).

Figure 8. Me2AlCl-induced regioselective and stereoselective reaction of methyl santalbate 11b and paraformaldehyde to give fatty acid ester 20 in 76% yield [19].

ω-Hydroxycarboxylic acids, including alkyl-branched acids such as 21, are of interest as polyester components. They are obtained with high selectivity by the ene addition of formaldehyde to unsaturated fatty acids such as 1a (Fig. 9) [15]. However, stoichiometric amounts of dimethylaluminium chloride (Me2AlCl) or ethylaluminium dichloride (EtAlCl2) have to be used. Acid (Z)-22 illustrated in Figure 9 is formed by addition of formaldehyde to the C,C-double bond of 10-undecenoic acid 13a. Compound (Z)-22 induces wound healing of tissue damage in soybeans by stimulation of callus formation at the damaged site [20]. 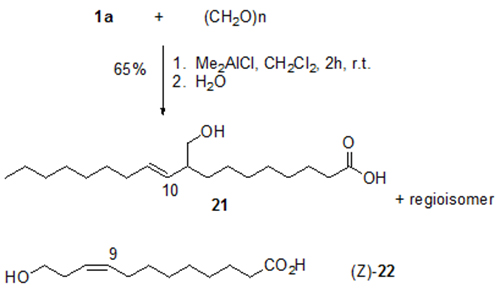 Ene additions of formaldehyde to natural oils proceed with formation of the respective di- and trifunctionalized triglycerides [21], and jojoba oil gives mixtures of 1:1 and 1:2 adducts [22]. Homoallyl ethers are obtained in an analogous reaction with acetals [23].