The high prices for vegetable oils attract a good deal of media attention. Figures in Table 1 and Figure 1 relate to European prices for selected oils in Rotterdam (except for the Malaysian palm oil). Prices are quoted in US$/tonne and changes in currency levels further affect the price of these commodities in countries where the local currency is not pegged to the dollar. Nor do the figures allow for the effect of inflation. From the 1950s until the 2007/08 surge in prices, the real cost of most oils and oilseeds declined by about 3% per year, corresponding to a halving of price each 20-25 years. It is apparent from Table 1 that in the recent past prices have fluctuated markedly, sometimes falling and sometimes rising quite sharply. The fall in prices during 2011/12 has continued in the early months of 2012/13. 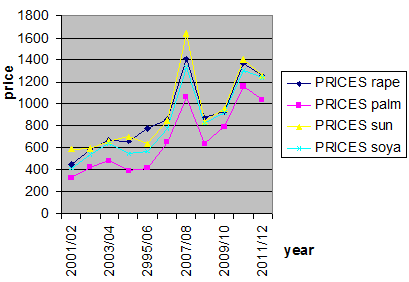 Price changes result from a mismatch of supply and demand influenced by the following factors: